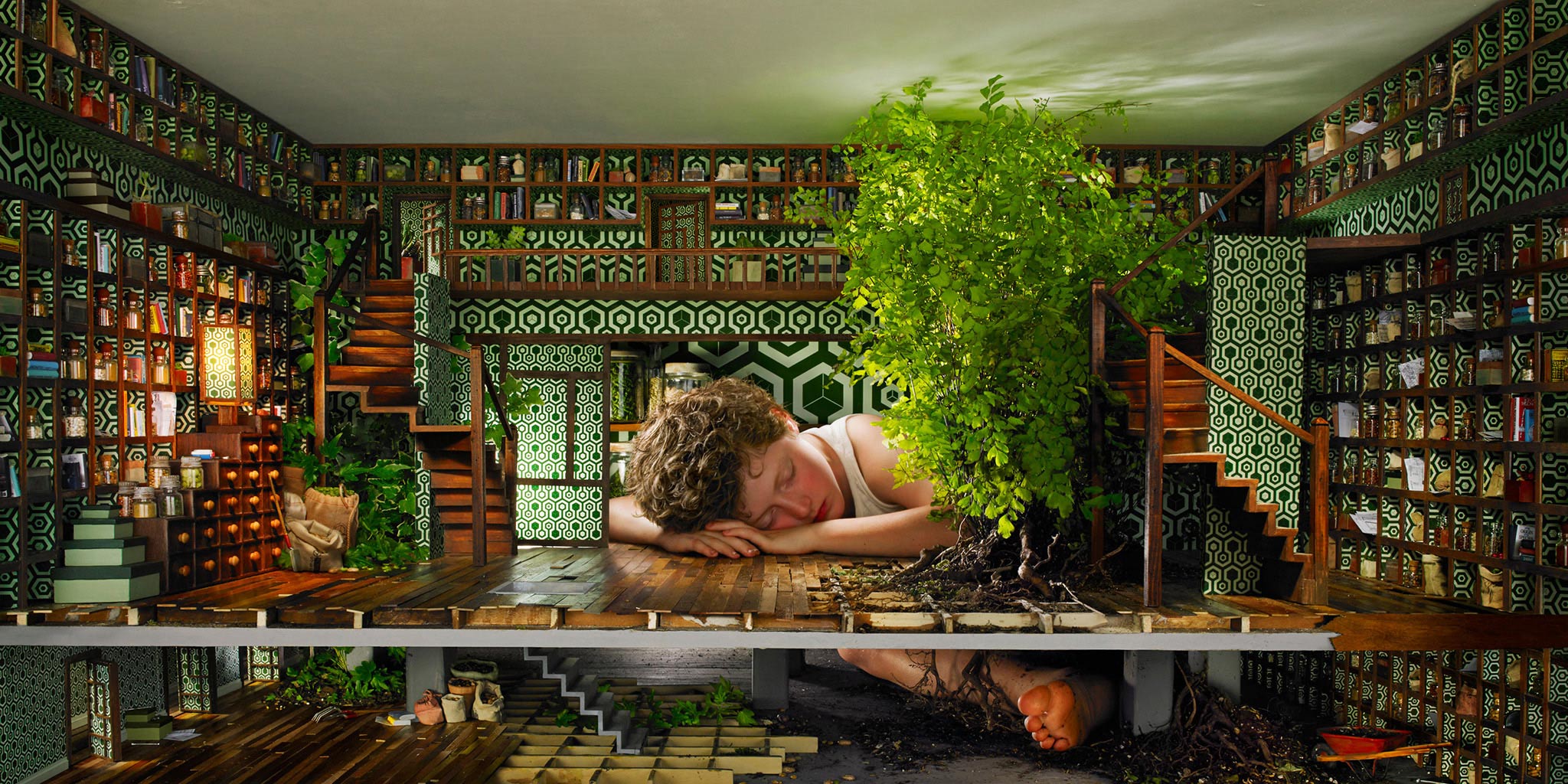 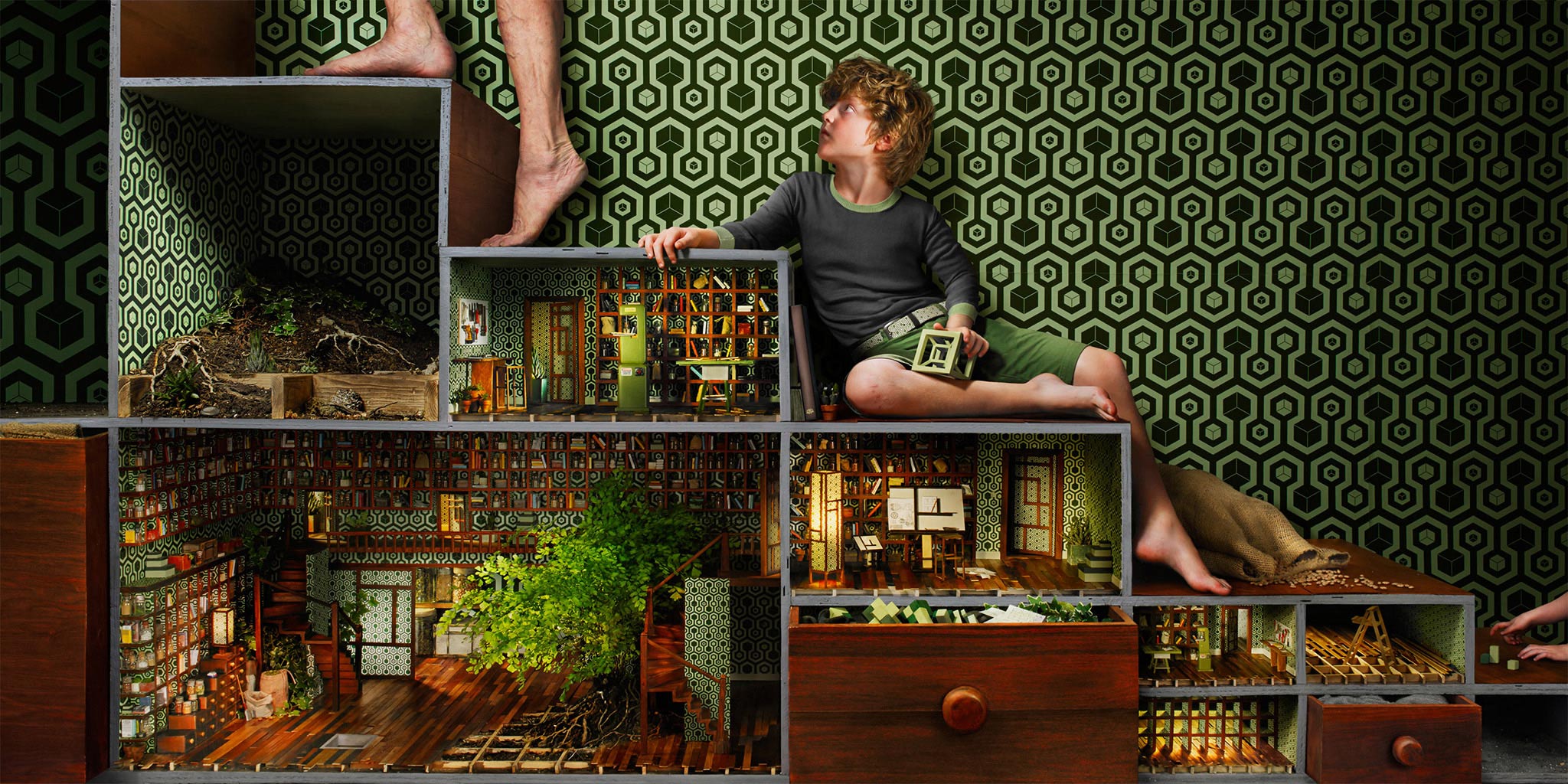 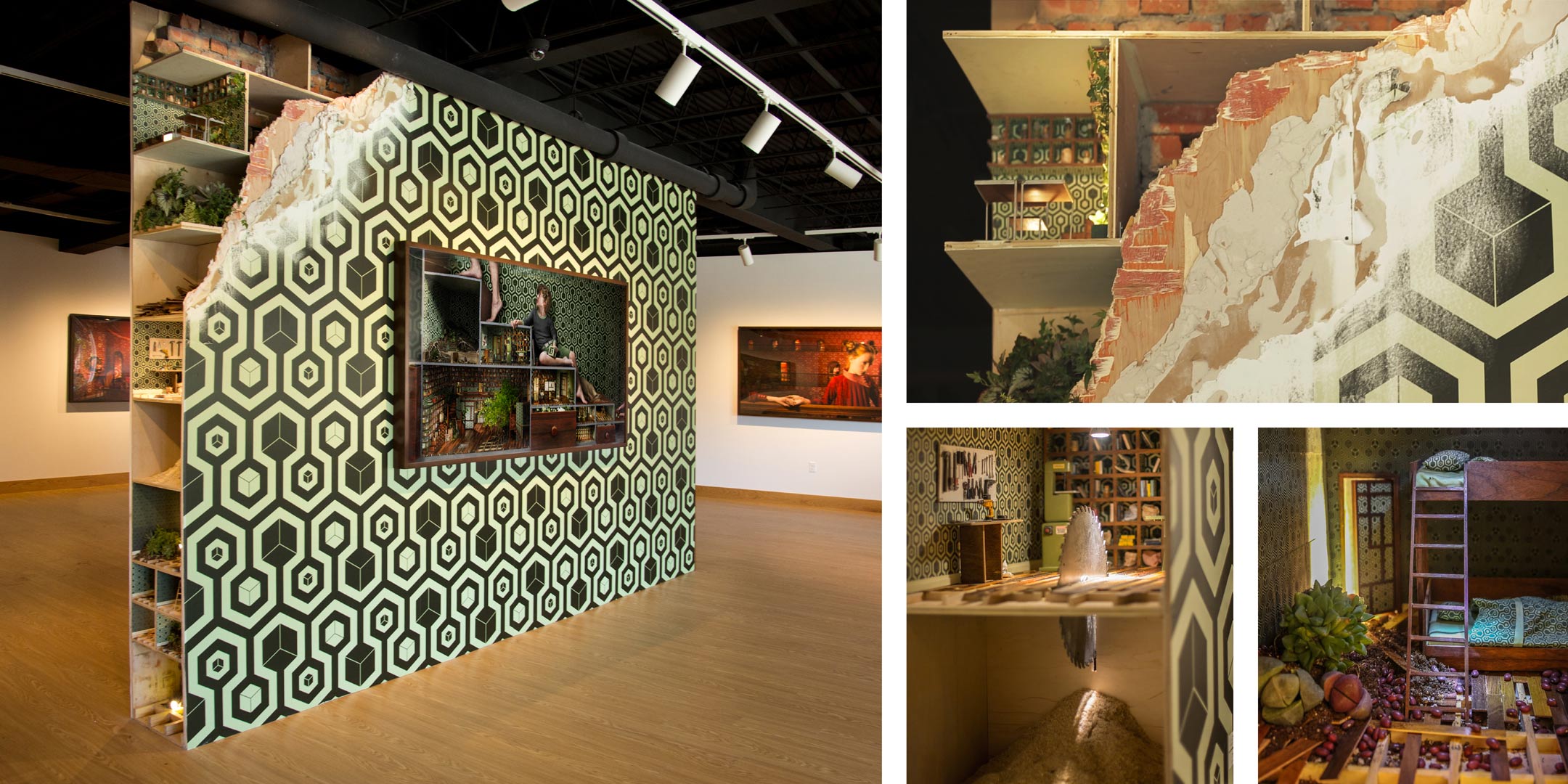 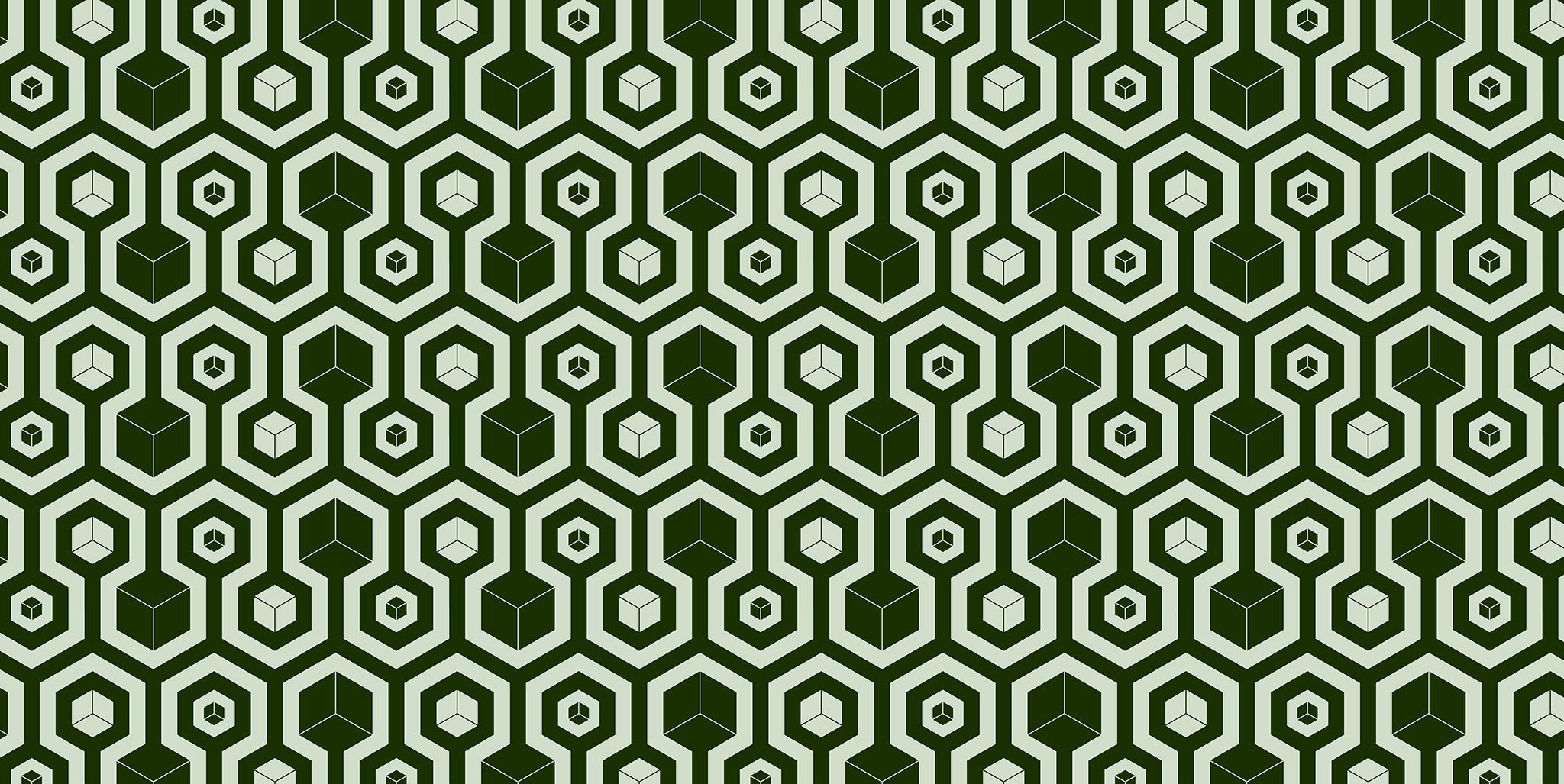 Wallpaper edition for The Square Roots, from The Fractal Architectures series 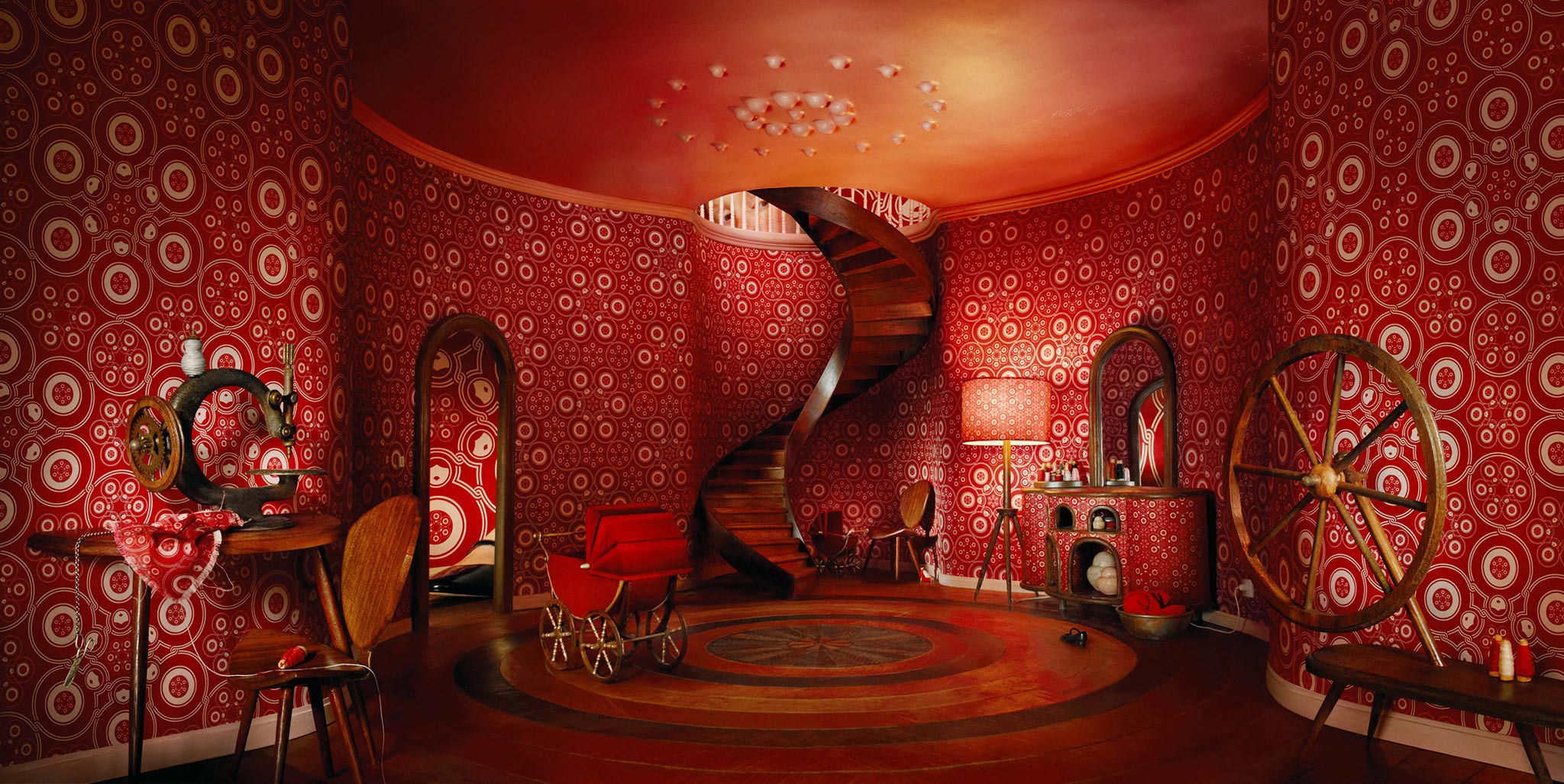 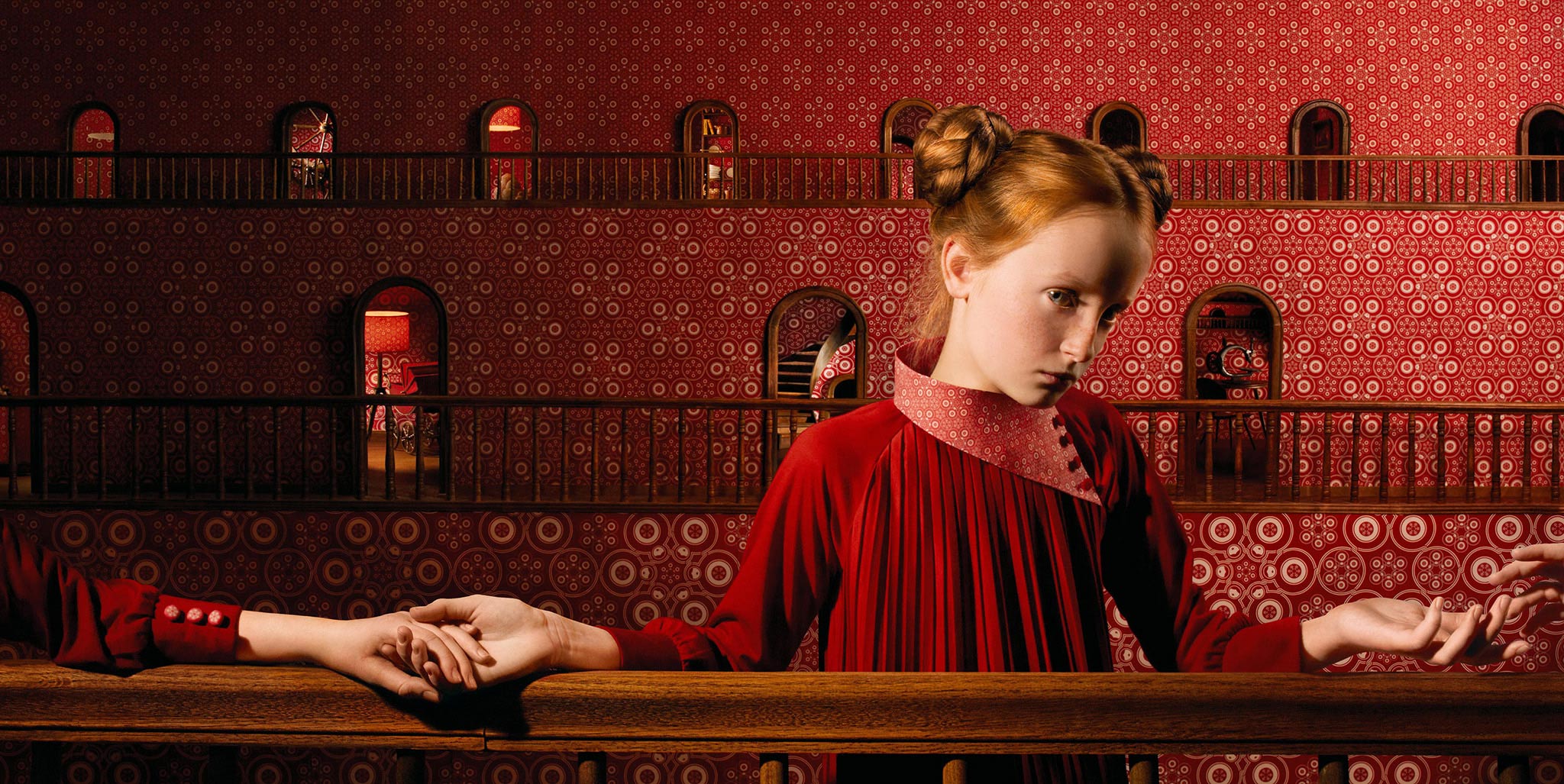 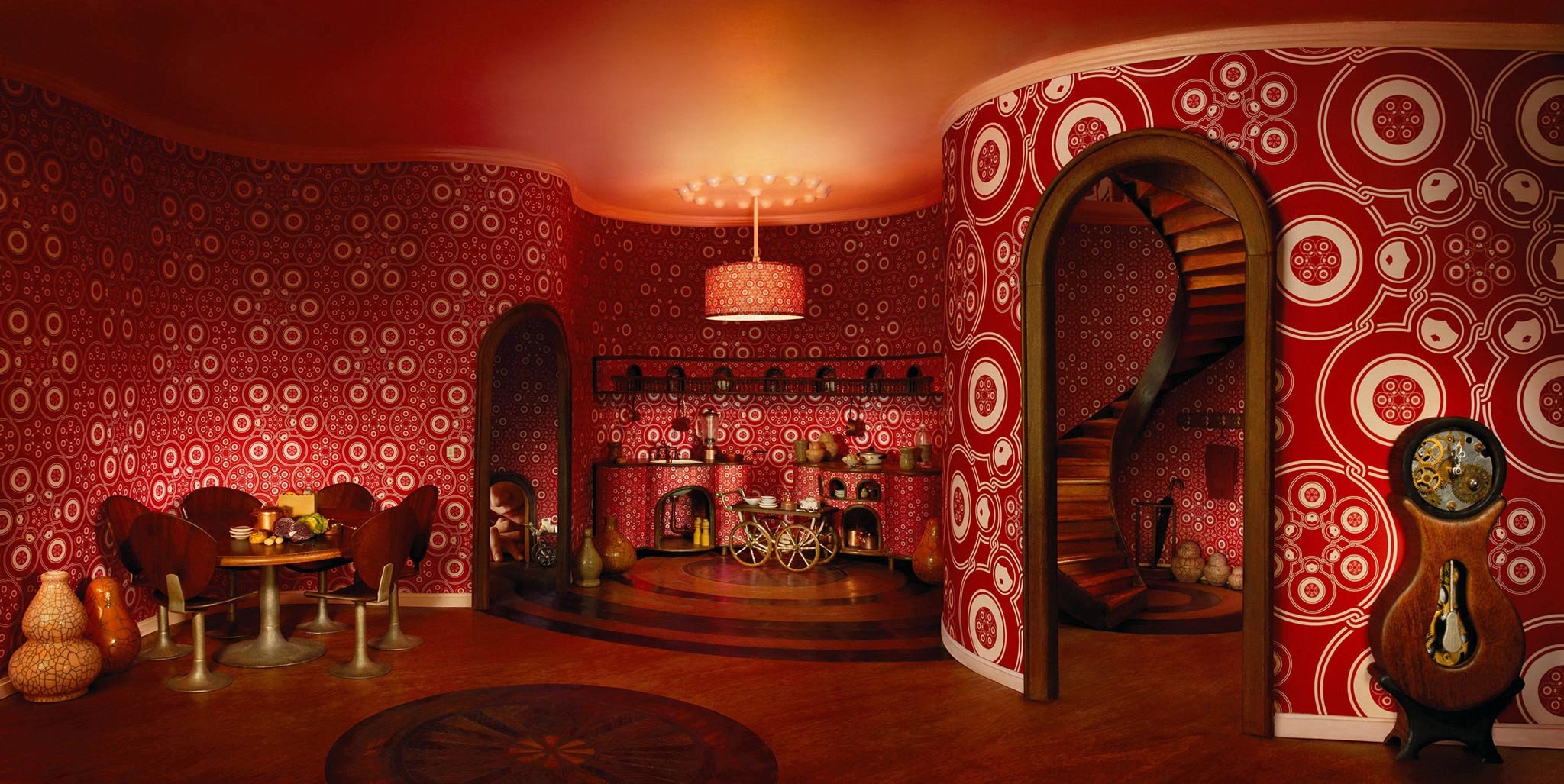 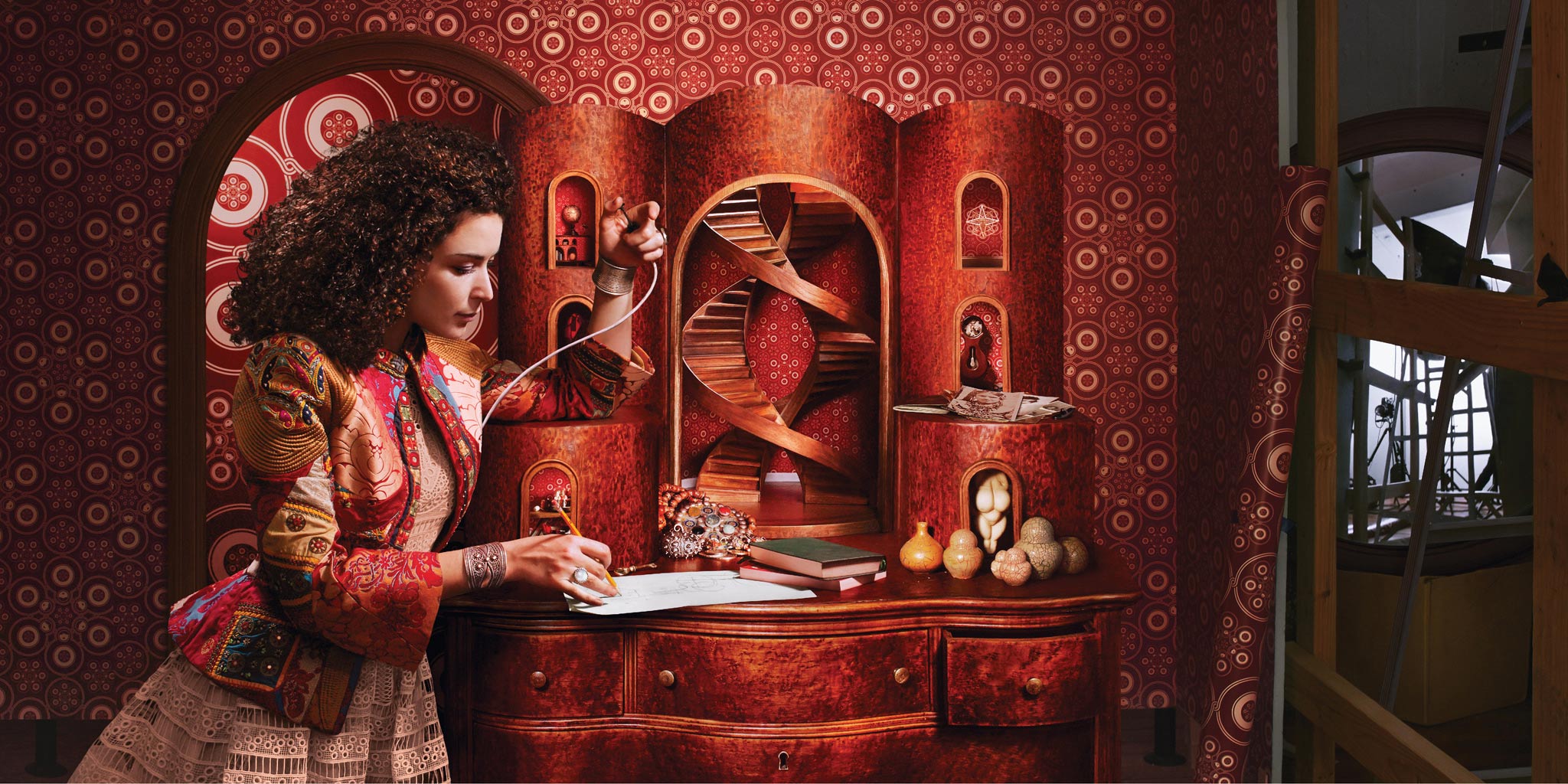 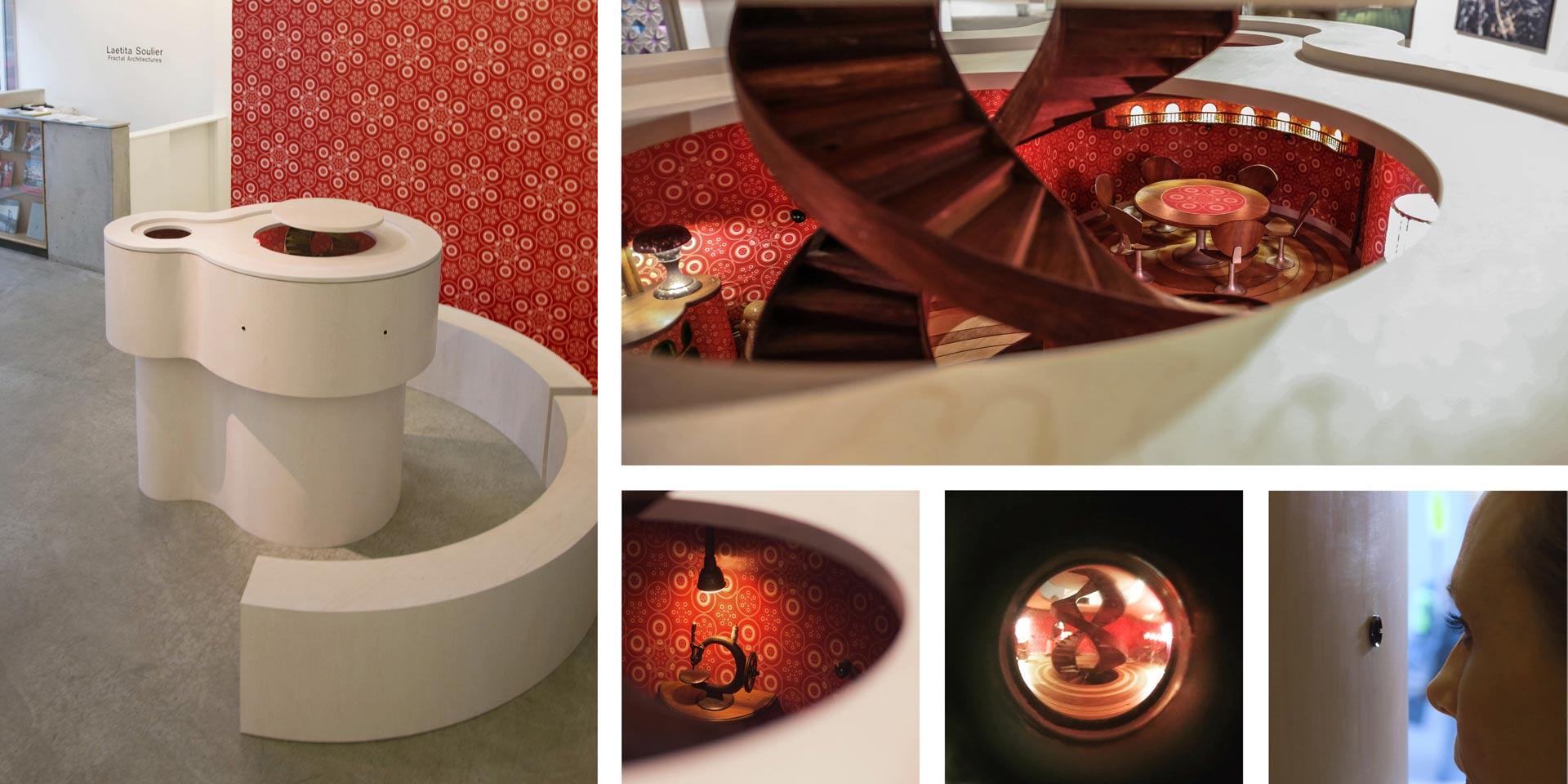 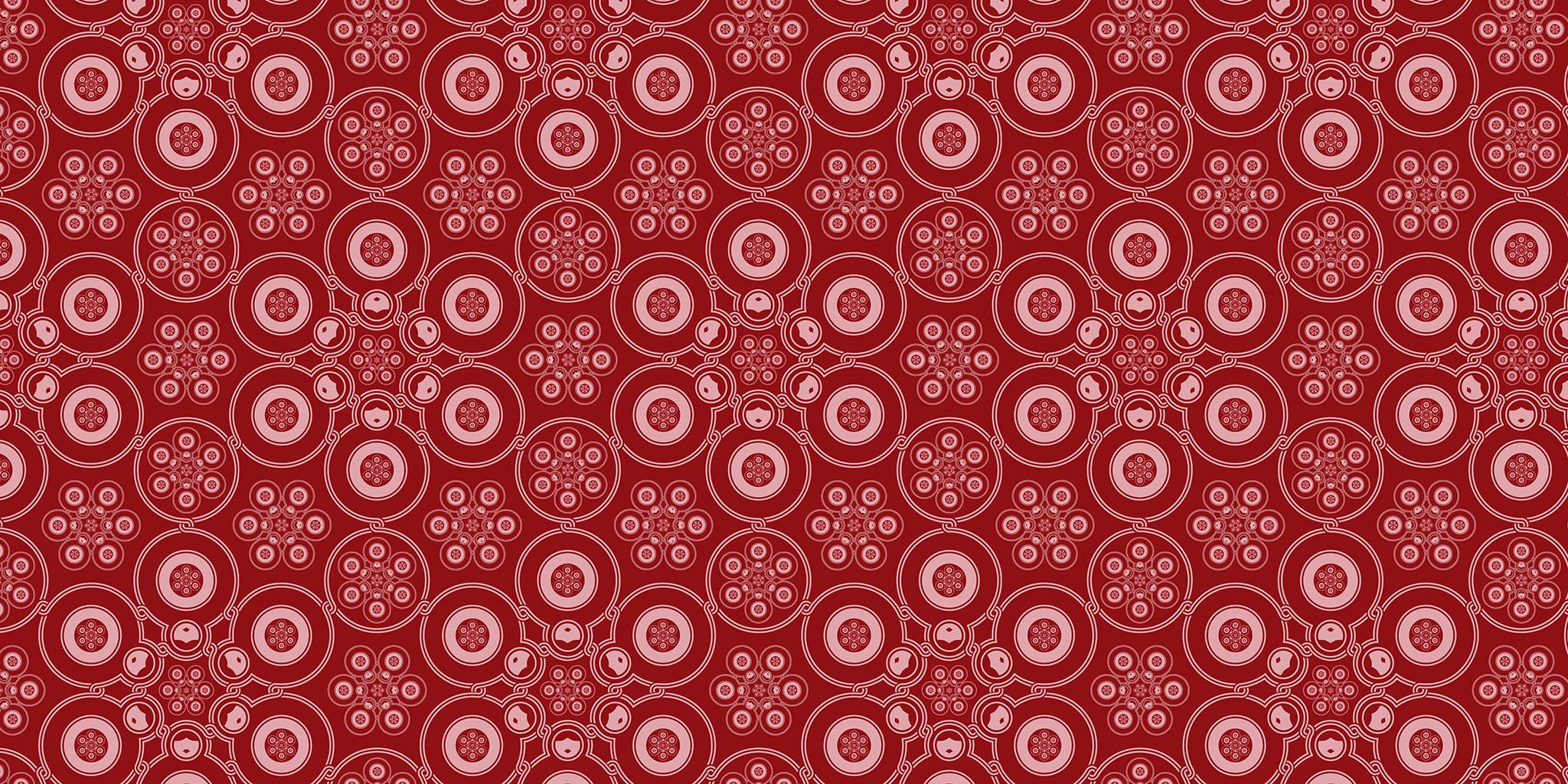 Wallpaper edition for The Matryoshka Dolls, from The Fractal Architectures series

Building the image – The Fractal Architectures series is divided into two chapters: The Matryoshka Dolls and The Square Roots. The hyper-realistic models, conceived for the unique point of view of the camera, are built in the toy scale of 1/24 to life size and above, following a fractal logic. Within the interlocked spaces, a foot, a thumb or a face appear to reveal the multiple scales incorporated in the model. Young characters unfold within these fractal architectures, which are at once their toy, their home, their childhood, their adulthood, the space between their past and their future.

Fractal Geometry – The conception of each model begins with a simple geometric figure; the circle for the Matryoshka Dolls and the square for the Square Roots. These elementary forms repeat at different scales to create an intricate pattern, which weaves together the infinitely small and the infinitely big. This never-ending fractal motif spreads across the wallpaper, and is the basis of the model’s floor plan and interior design. For example, the wallpaper for the Matryoshka series is made up of nested dolls woven in a circular dance, each impregnated with this repeating pattern. Similarly in the model, the circular archetype puts everything in rotation; the hardwood floor grows in concentric circles, the doors bend in arches, and the staircase swirls to the higher alcoves. The walls undulate organically, folding and refolding in a womb-like interior where the exterior seems to no longer exist.

The red and winding spaces of Laetitia Soulier’s “Matryoshka Dolls” series allude to the intricate worlds of David Lynch, as well as Piranèse’s deceptive architecture. We find on the one hand, an atmosphere of oneiric complexity, flushed with color and steeped in mystery; and on the other, mathematical structures, rooms replete with nooks and crannies. The hypnotic geometric motifs play rhythms on the wall and yet time appears to be suspended.

In one of the photographs, part of a face peers out of an arched doorway; its out of scale size hints at a higher realm. A spiral staircase winds upward like a strand of DNA, reaching toward some mysterious hereafter. Among the elements that govern this oscillation between the real and the imaginary is a game of reminiscences and repetitions. This fractal logic acts as a structural lattice that delineates these worlds, which nest one within the other like Russian dolls. The artist illuminates the dynamic interplay between a universe entirely fabricated from an elementary figure – such as a circle or a square – and a complex reality, which is ever changing, and ever expanding. The “Matryoshka Dolls” project is based upon an initial motif, that is continually reshuffled, reconfigured and displayed anew. A simple geometric figure, reiterated like a leitmotif, serves as the basis for almost everything in these fictive spaces. It explores the semiotics of the circle, in The Matryoshka Dolls series, or of the square, in The Square Roots series.

The fractal nature of these photographs is based not so much on formal manipulations as it is on the logic of the work as a whole. Fractals juxtapose two distinct realities through the use of a singular and indivisible entity, in this case the circle or the square into an endlessly divisible mathematical space. We recognize a fractal only by virtue of its tendency to express two contradictory forces, which nevertheless feed off each other to produce a single system. Thus, an initial movement creates a macroscopic layer, an entire space that appears to break down indefinitely, allowing us over time to glimpse a global coherence, a structural momentum. This movement is mirrored at the microscopic level by the uninterrupted advancement of a corresponding element. Far from a dualistic dialectic, this fractal logic combines two distinct realities to clear the way for a third path, permitting a greater whole to come together with a momentum that takes a cyclical or spiral form.

This is what we see, in the photographs from “Square Roots.” We are thrown into the heart of a fully formed reality, into “the big picture”; a boy sits on the stairs, while small hands play behind him, and he contemplates the steps of the grown man above him. But the structure of the photograph draws us into the compartments, which, like so many places and inward moments, represent the stages at which we gain understanding of ourselves and of the world.

Using fractals, to connect the whole to its parts, Soulier’s work reveals the movement of life itself. Just as a spiral combines expanding and contracting forces, the viewer simultaneously perceives an image and it’s construction. If fractal dynamics are what enable this nesting of realities, the “Fractal Architectures” series does not aim at the reproduction of a preexisting world, but of a world, which is building itself. More precisely, what fractal motion seems to produce, through these contrary movements is an image in which we cannot tell whether we are on the side of construction or deconstruction. To use an expression from Deleuze and Guattari from A Thousand Plateaus, this “zone of indiscernibility,” interrogates the fabric of all acts of creation. By dismantling and recycling the materials from one model after the photograph is made and using it for the next construction. Like Nietzsche’s eternal return, Soulier’s work questions this very moment, which consolidates the birth of the self and its relation to the world, before its dissolution and reintegration.